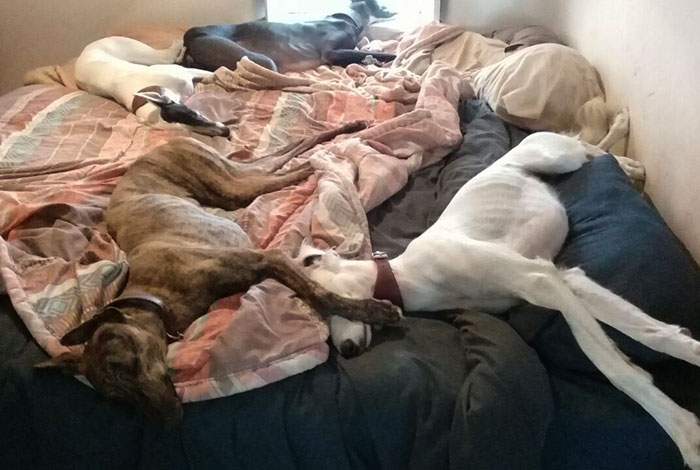 Onyx and Amber have settled into the Crazy Hound House very well. Amber continues to be wild when she plays, and helped along by Dapper, Blanca and Wilee, has been up to plenty of mischief.

Somehow the brat pack always end up on the bed and the other day I caught them biting a hole in the mattress of the single bed next to mine that Jack and Flash sleep on. They were having a wonderful time and there were bits of foam all over the room! They didn’t show the least bit of remorse at the “explosion” and a short while later were at it again, so I had to chase them all out of the bedroom. Amber also loves stealing clothes, so she is always going through the laundry basket and I find small items of clothing all over the house, some with a few holes in them!

Onyx is also a thief, but he loves food. I was eating a packet of popcorn and needed to go outside so I pushed the packet behind the microwave to keep it out of harm’s way not realising that Onyx will go to any length to steal food and because he is fairly tall and has a long body, once he stands on his hind legs and stretches his neck he can reach most places. It was a first that someone had actually gone to that much trouble to steal something and when I came back inside the popcorn packet was on the floor, torn open, all the popcorn gone and the packet had been very well licked! The funny thing is that when I went outside, they all went with me, but when we were all busy outside, Onyx sneaked back in to get the popcorn. Now when he disappears I have to come inside quickly to make sure he isn’t getting up to mischief. There have been a few other things he has taken. He has chewed up a couple of milk cartons, he stole a packet with some goodies in that someone had given to me and he tried getting to a pan that I had put on top of the stove to soak so I could wash it. He knocked the pan and a radio standing close by onto the floor. I was alerted when I heard crash, bang going on in the kitchen.

Other than these bouts of mischief, they are both very good hounds and I adore them, I am very glad that they came to live with us.